WILL IT GET DONE THIS TIME?? 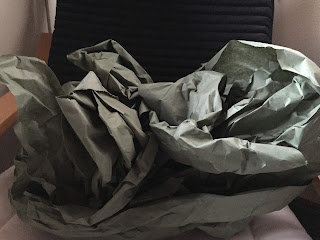 What is this pile? You wonder, right? Doesn't look like much...and in fact really isn't. But....It has potential, I think.

Every time I receive an order from my printer the green paper that pads things calls out to me with that potential. I see birds especially...sculpted from the lovely stuff. Plump little green guys. Maybe painted. Maybe not. Maybe with wire legs, button eyes? Possibility. Potential.

But each time, after a while, I have not done it and the paper goes to the recycle bin. Will it happen this time?

Does anyone else have more ideas than time to explore them or is it just me? I doubt it's just me.

Posted by cherril doty at 11:04 AM No comments: 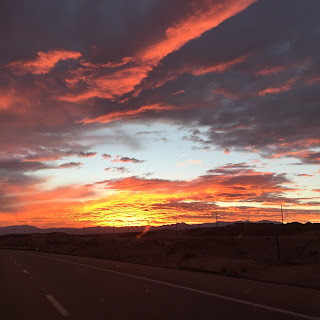 The weather doesn't tend to answer that question in the affirmative. But those who are doing the art festivals here in town are thinking that day is REAL close.

Festival season starts winding down this coming Sunday, August 28th, when the Sawdust Art Festival shutters for the season.( If you need tickets for this final weekend, email me at cherril@cherrildoty.com)

I'm thinking that it is getting close to time to hit the road for a short road trip (hence the picture here) And workshops start up for me again on September 18th (almost full) so plenty to think about.

What are your plans?

Posted by cherril doty at 11:17 AM No comments:

PLAYING AROUND GETS RESULTS After experiencing beginner's luck with subsequent failures at the last mixed media playtime, I decided to take some time, study, and research to see if consistency might be achieved. And so I began. And went on. And tried again. And went on.

Finally, I met with some successes again--some better than others, I will admit. Still....I think if I keep at this.... Meanwhile, I am having some fun with the results (adding ephemera and more.) So stay tuned to see the final result.

For sure we will be doing more of this experimentation at the workshop on September 18th!!

Posted by cherril doty at 2:37 PM No comments: 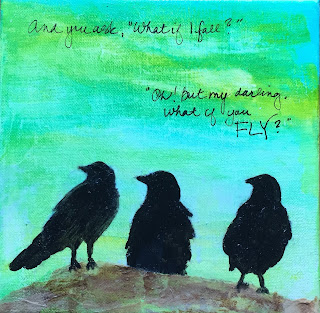 I have long thought that many of us who create do so in part to make connections with others through our art. Recently, I have been blessed to make a few of those connections and I would like to share this one with you because it is so beautiful:
As I do when I can, I reached out to the purchaser of an original piece--Crow in the Snow--and the following is the reply, which I have permission to share. I think it is pretty special.
"Dear Cherril,
Thank you so much for reaching out to me and I am fascinated to know that you loved this picture so much that you did not want to let it fly!
Let me tell you why I wanted to buy it.
Firstly, it is a beautiful picture and I was attracted to it immediately due to its style and feel.
Beyond that, let me tell you a short story. A true one.
I am English but I live here in Orange County. My daughter was born here. We went to England in June. She had previously bought me a book called 'England's Most Beautiful Villages.' We decided to pick few local ones and make them the centerpiece of individual days.
One day we picked Heptonstall in Yorkshire. On the way there we drove through Mytholmroyd. I knew that Ted Hughes, a former Poet Laureate, had been born there and, according to our charter that all interruptions and segues were to be followed, we stopped and looked for some record of his existence. We found the house he grew up in (until age 8), did some pics, and then I made her listen to me read 'Hawk in the Rain.'
We moved on towards Heptonstall but, in case you didn't know, Ted Hughes' 'Crow:From the Life and Songs of the Crow' was considered his masterpiece.
In Heptonstall, quite unexpectedly, we came upon Ted Hughes' wife's grave. His wife was Sylvia Plath, an American, who was the author of The Bell Jar.
We had a wonderful day.
When I saw your Crow, I wanted it to remind me forever of that day during which we saw Ted Hughes and Sylvia Plath but also ourselves and I knew that every time I looked at your Crow it would remind me of that day and my daughter forever.
So thank you for all that!
Keith
WOW! Right? Such a delightful connection for all of us. And now I find I see Crow in the Snow through different eyes and I am soooo glad that I decided I could part with it.
Connections are beautiful things and I thank Keith for sharing.
(I thought to shorten his letter, but found I could not leave out one word.)
Posted by cherril doty at 11:38 AM No comments: 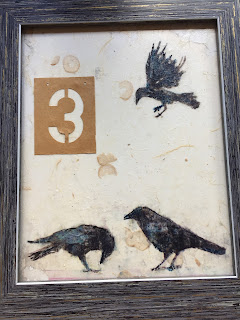 And of course the answer to "Will there be crows?" is a resounding YES! Whether one, two, three, or an entire murder of crows I seem to not be able to create without including at least some of them here and there.

At the summer's Sawdust Art Festival this year you can find them in many forms, from cards to card collections, to prints, to originals. Several have flown away, but we will be there until August 28th is you want to meet the remaining ones. And of course, there are likely to be new ones coming along too.

Posted by cherril doty at 3:37 PM No comments: 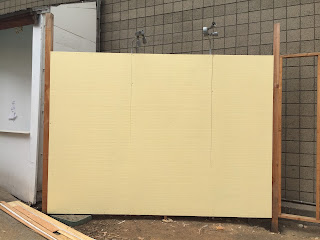 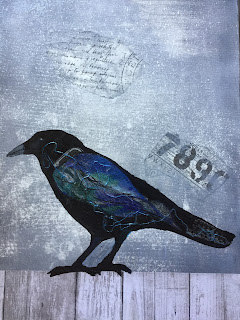 The blank gallery wall at the summer's art festival awaits. Shelves and signage and more will go up on Tuesday awaiting the fill with art work on the coming weekend.

The festival gates will open to the public on June 24th at 11 am. You can check out the scheduled hours and events at http://www.sawdustartfestival.org

Will there be crows? Well, I guess you will have to show up to find out 😀 Let me know if you want tickets placed at the box office for you.

Posted by cherril doty at 11:48 AM No comments:

Just call me twinkletoes, I guess. After writing that last blog a few weeks ago, I was blessed to receive a lovely email from a former student, who had started, along with her sister-in-law, to play in mixed media years ago when Suzette and I taught weekend workshops at the Sawdust Art Festival.

They have gone on to take more classes from Suzette and me after we moved them here to my studio, but not for several years. They went on to take workshops from a lot of other instructors and are quite addicted. I would love to see what they have created by now as I'm sure they have gotten quite good at it. That's one of the beauties of mixed media play...the vast array of possibilities.

So, yeah, I'm dancing for joy that we were able to start someone on this wonderful path of creativity. And of course it's super to receive a note from someone like that. Purest joy! So, play me a tune, Piano Man.

Posted by cherril doty at 1:51 PM No comments: