SOME THIS AND SOME THAT 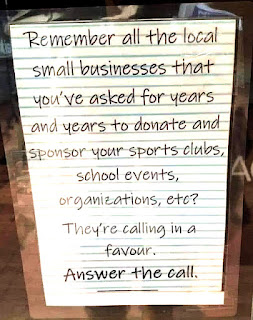 On this Thanksgiving weekend with all it's Black Friday, Cyber Monday, Stay Home, Wear a Mask, and political confusion, don't forget that the small businesses in your community really need your help.

Shop art and other artist-made items at the Sawdust Art Festival, open for business from 10 to 4 on Saturday and again on Sunday.

Or check out downtown stores. 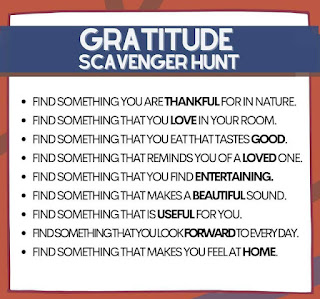 These words on gratitude are gentle reminders of all that we do have.

Sometimes we just have to go on that scavenger hunt to find the things for which we can be grateful, even in the midst of this terrible pandemic. 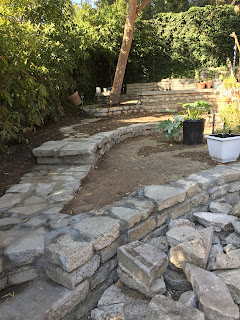 For me, today is a beautiful day in which to be grateful for sure, as I spend it in the garden, planting more produce (especially those leafy greens) that will satisfy for many a meal.

When done, some art is waiting to be finished on my workbench, some bills need to be paid, Barack Obama's A Promised Land awaits, a bit of exercise, and perhaps a well-deserved nap is on tap.

Meanwhile...grateful for so very many things.

Posted by cherril doty at 12:47 PM No comments: 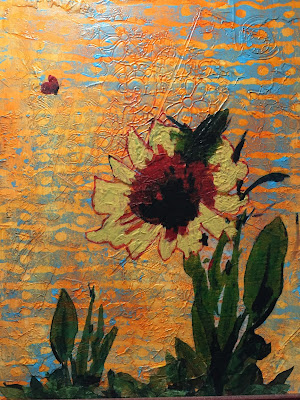 Something always enjoyable to create with is adding textural play as the underneath layer...start with it as the first layer and just build from there.

For this sunflower piece, the texture began with medium texture paste spread on the substrate. Then, after swishing the paste around to create a bit of texture, briefly press a stencil into the paste.

Now, once dry, there is some great textural relief to build upon.

Here, it was followed with some fun paint and paper play. What would you do?

Have some fun with texture!

Posted by cherril doty at 8:46 PM No comments: 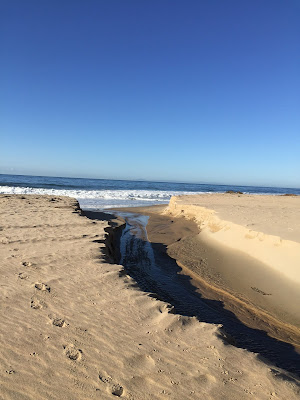 As traditional celebration hopes dwindle, there is still so much for which to be thankful. Just look at this wonderful natural fissure at Crystal Cove beach and the ocean and clear blue sky beyond.
Not everyone is this fortunate. This is not lost on me. At risk of sounding like some sort of Pollyanna each time I celebrate the beauties that surround us...they do bring great joy. Still, there is constant awareness that all is not right in the world right now. There is certainly no need for me to enumerate the negatives. We all know they are there.
And yet....I firmly believe there is room for gratitude in all of our lives. We just need to find it and hold on to it as tightly as we can.

Posted by cherril doty at 6:55 PM No comments:

The changes over the past four years have certainly not all been what I hoped for when creating the mixed media series A Celebration of Women.

Here are some pictures of a few of my favorites from that series.

And here is what I wrote about the series at the time:

A CELEBRATION OF WOMEN:
The presidential election of 2016, while divisive on many levels, seems to have catapulted women into joining together in action on many fronts. Following in the footsteps of many honored women before them--and creating some paths of their own--these women are marching...speaking up...speaking out...standing together...demanding many long-needed changes...showing unquestionable courage, strength and determination. This series is in honor of all those women and the many others who still have no voice or who have been silenced.
Change is in the wind. 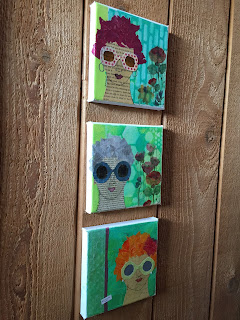 While many of the hoped-for change did not occur, the unrest is still there...the need for even a greater realm of inclusion into those that need exists as never before.

There is much to be done.

The series that followed this one showed women without the dark glasses. Guess that wasn't enough.

There is much to be done.

Then I seem to have moved on to a series of Crows. Perhaps that reflected the darkness some of us were beginning to feel casting a veil over the hopes.

There is STILL much to be done.

AND I still celebrate women and what they can accomplish. To paraphrase a certain shoe brand, "Let's do it!" 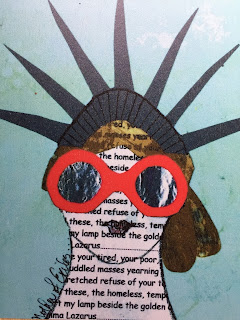 Posted by cherril doty at 12:34 PM No comments:

Author Pam Houston asks, "How do we mourn and be joyful at once?"

We have some pretty glorious sunsets here in the west. Whether standing on the shore or driving westerly we can be mesmerized and entranced by the stunning beauty. Sadly, all too often the glories are due to the weather fallout from fires or other dirty air contributors.

How do we navigate through both the love and the sadness? What of the losses that contribute to all this beauty, whether from fires or pollution or other outcomes of our ever-changing climate?

Perhaps the answer lies somewhere in acceptance, at least the acceptance of allowing for the questions and the pain of those questions and then doing whatever we can to alleviate, to move toward more positive change. Is this a dangerously naive stance to hold out this hope? Acknowledging my own lack of knowing and still keeping my heart wide open to this glory is a start, even while a small one.

During this year of 2020 with all the political upheaval and covid-19 concerns, to see the beauties of our wonderful planet is certainly a blessing. Hopefully, it is one we can allow to continue. Whether the beautiful sunset, the lush green of a meadow, the screech of a hawk, the hooting of an owl in the starry night...preserve and protect...and love it with all my being, even knowing so much is being systematically destroyed. Challenging. 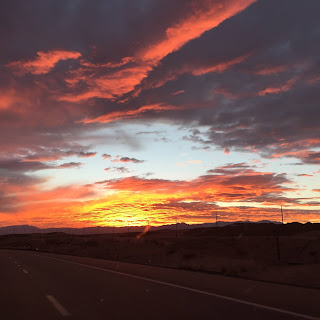 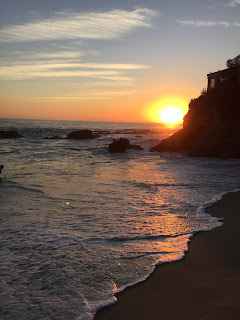 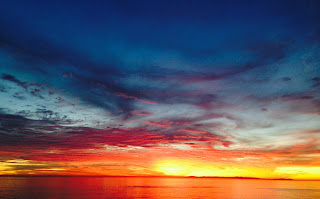 Posted by cherril doty at 9:24 AM No comments:

There seems always to be such a great deal to love about Sunday Studio Workshops...even in these difficult times. Women coming together to create in a playful, joy-filled way warms my heart. And this group on the past Sunday was all that and more.

Pre-covid we added potluck into the mix and I have to admit that was even better as recipes were exchanged and exclamations were pronounced over certain flavors. Grazing would go on throughout the five hours and, often, a bottle of wine would be shared at some point.

Still, even without the potluck, the camaraderie was present and art play was plentiful as postcards were created by all. (We strive to do our very best to save the postal service.)

Not sure when another Sunday Studio Workshop will be possible even with the careful social distancing, but I am ever-hopeful it can be soon. Meantime, take care of yourselves and wear those masks.

Posted by cherril doty at 10:31 AM No comments: 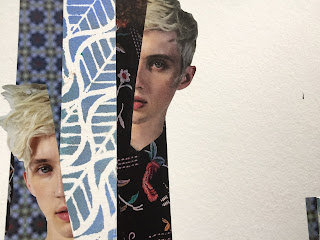 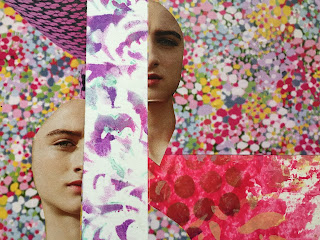 Oh, happy blustery days!! A new, civil president has blown in on the horizon.

Got the idea for split images from artist John Arbuckle who got it from someone else and am hoping that students will have as much fun with it as I have these past few tense days.

Posted by cherril doty at 10:20 AM No comments: 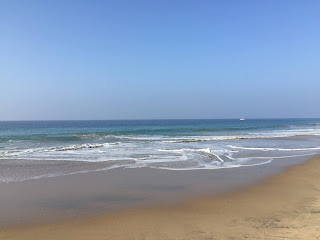 On this morning following a contentious election (oh, yes, again!) am wondering about the constant labeling of all democrats as "left-wing radicals." Had been denying this with great force for myself and then suddenly this morning thought, "Well, perhaps I AM radical."

Radically opposed to denigration of others for whatever reason.

Radically at odds with mismanagement of our precious environment.

Radically disgusted with misuse of power.

Radically disturbed and frightened by flagrant wearing down of democracy.

...and I could go on, but guess you can get my drift. In these things, I am PROUD to be a radical democrat.